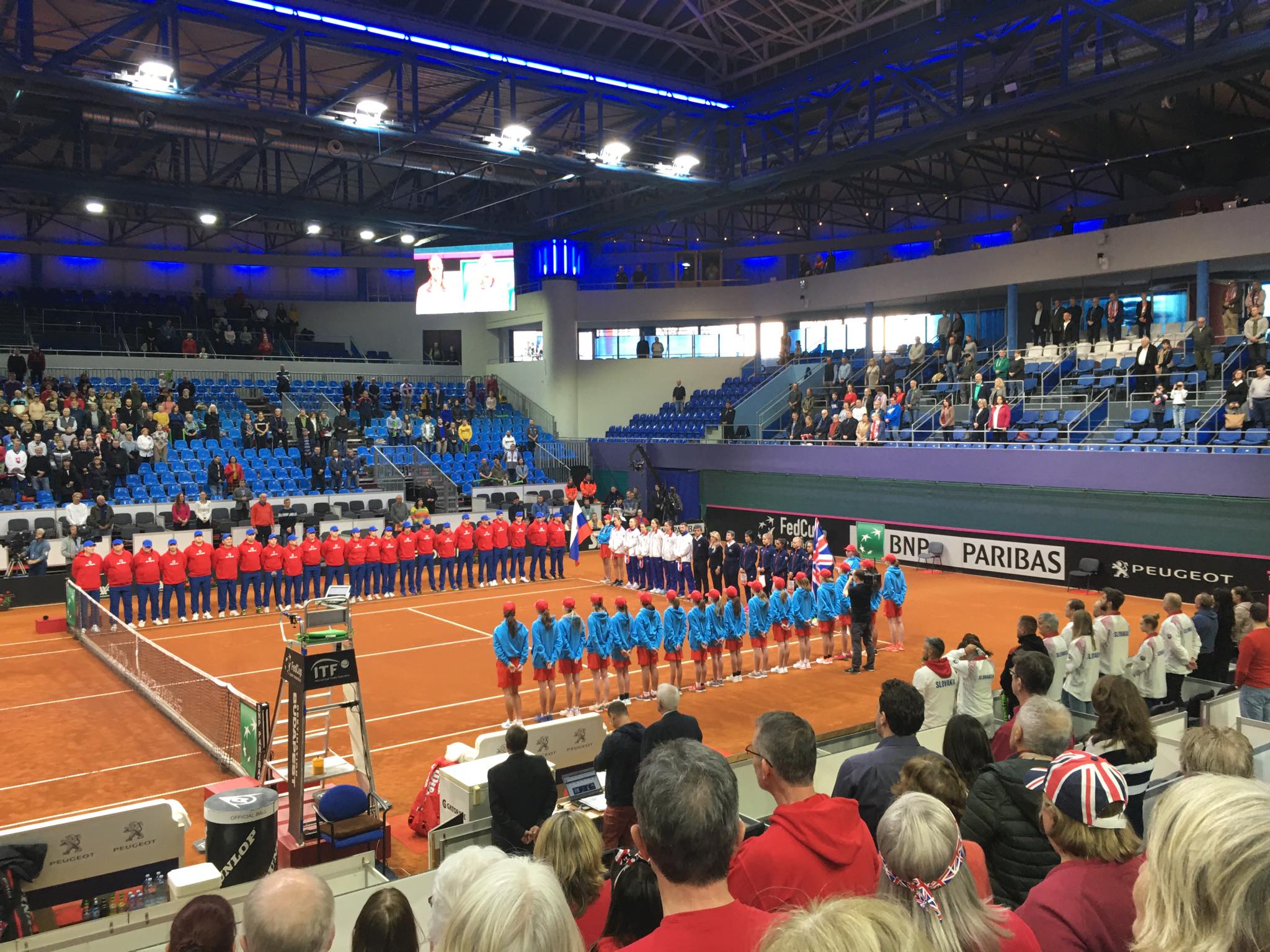 I’ve been going to Fed Cup ties since 2015, and every year of that has been spent watching us in the Euro-Africa Zone 1 round-robin tournaments with the occasional playoff loss thereafter. That was until those magical weeks last year in Bath and then the Copper Box where we finally managed to get up into the World Group!

Changes to the format over the summer meant we went into the new format, and when Slovakia away was drawn it was one of those that could go either way. Clay has never been our friend, however, and when Jo Konta revealed she wouldn’t play I’ll be honest that I went to Bratislava thinking we may be counting sets rather than rubbers come the end of the tie.

Our BATS trip started on Thursday night with the traditional meet-up. As Bratislava is only a few hours down the road from me in Prague, and I’ve been there more than enough times, I was able to organise a decent Slovak pub to host it in. If you’ve never been on a BATS trip, or are thinking about joining, these are great – you can just relax with a drink, some food, and talk to other people who just enjoy going to different places to watch tennis. We got our tickets from Jan as well, and it got me thinking how simple that all was – perhaps we underestimate the work that goes on behind the scenes sometimes to sort all of this out, but it’s much appreciated!

Friday tennis soon came around – I know some others did some good ‘touristing’ around the city beforehand as well! It’s fair to say that Hev’s rubber with Anna-Karolina Schmiedlova was a pretty frustrating watch. The Slovak played a very accurate game and in fairness rarely missed, but Hev was unable to convert enough winners and unforced errors, which ultimately cost her in a 6-2 6-3 defeat. A disappointing start.

That was in complete contrast to what we saw from Harriet Dart who stunned the Slovak #1 by stealing the opening set on a tie-break. Losing the second 6-3 meant that the final set had a bit of an ominous feeling about it, but her ‘never say die’ attitude was nothing short of inspiring. After clawing her way back to five all, she however lost serve but still saved countless match points before going down 7-5 in the third.

Arriving on Day 2 down two rubbers it seemed rather bleak, and in my own mind I saw very little way we could end up winning the tie overall. However, sport isn’t played on paper and when Viktória Kužmová was scratched late for Rebecca Šramková we knew there was a good chance for Hev to get us back in the tie. She responded from the previous day’s disappointment emphatically in a 6-0 7-5 win in a match that rarely looked in doubt. For all the criticism that you could level at her game, you simply cannot fault Hev’s commitment to Fed Cup, Team GB, and tennis in general. It was nice to see her finally win a game at World Group level after losing all of her rubbers against Romania and Japan.

Harriet Dart again played well above her ranking facing star of the tie Schmiedlova. One break cost her the opening set, and despite hanging in the second as long as she could, it would eventually go 6-3 to Schmiedlova. Dart again refused to be beaten and saved a handful of match points before going long and giving Slovakia the overall tie win.

I’ll admit it was a little bit disappointing to lose the tie when we’d been in almost every rubber, and it’s never fun losing away from home. That said, what could have been a whitewash was most definitely not, and for me the performances from Harriet were worth the ticket and train price alone. In theory she is our number four, if you assume a fit Konta and Boulter are available. That would be a very handy team in the future.

So, we won’t be in the first Fed Cup Finals in Budapest. I suspect this may be a blessing in disguise as teams 11 and 12 end up relegated direct to the zonals, and given the strength of opposition we would be one of the favourites for that. Instead, an adventure awaits – Mexico away! Likely to be on clay, but a very winnable tie. Joining BATS led me to Japan which I’d probably not have considered doing alone, and so I’m looking forward to hopefully making this trip with others as well!

It was also great to see such a large travelling support for the team. Fed Cup has often been the shadow of the Davis Cup, but 60 BATS and others who went independently was amazing to be part of at an away tie!