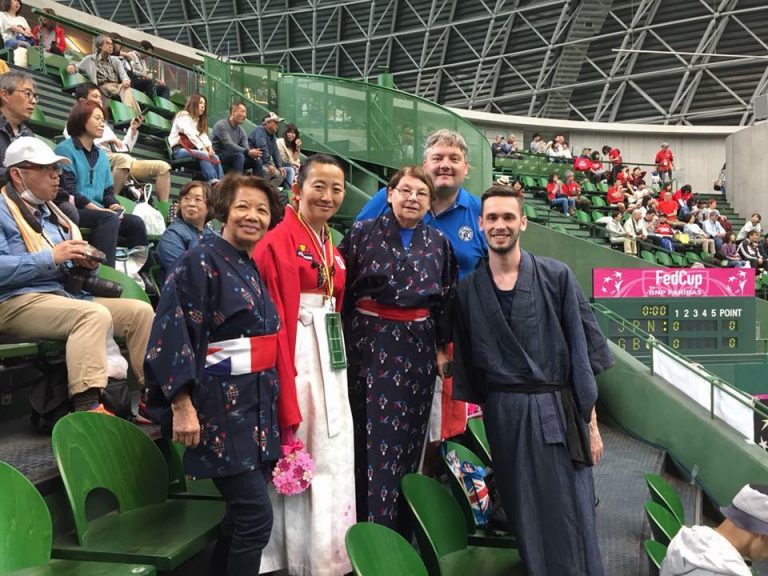 Back in 2015 I was living in Budapest, and noticed that Great Britain were taking part in the Fed Cup that week in the city. I’d not been to watch any live tennis since going to Wimbledon in 2006 (!) but regularly watched major tournaments and Davis Cup on TV, so thought I’d pop along. I didn’t bother with the first day against Lichtenstein because it didn’t seem worth it, but the next morning we had Turkey so I got on a tram to SYMA.

I didn’t expect two things that day – one, that there would be a decent core of British support; and two, that we’d lose the tie! I left shortly after the second rubber in minor disgust, but came back the next day for what turned out to be an epic against Ukraine. I won’t go into details of the games because you can read that elsewhere, but some overly-fussy security not letting me sit behind one end where I wanted to watch meant I ‘accidentally’ ended up in with the BATS over on one side. Being there on my own, and living in a foreign country, I quite enjoyed being able to sit with some people from my own country and could talk to! I will always remember Sue Richardson obviously seeing the terror in my eyes at all of these middle-aged (mainly female) tennis fans and inviting me to sit with them; but everyone was very welcoming and within about 15 minutes Mary offered to ‘sign me up’ – “Is that what you kids call it these days?” I replied, thankfully everyone laughed and I knew I was in good company!

About four months later I was lucky enough to go to our home Davis Cup tie at Queens via BATS, which was something I’d not really considered doing before. It was a whole new world to me that people were going to home and away ties, although I’d often watched on television and thought “WHO are these people going to Luxembourg for tennis?!” With Fed Cup going to Eliat the year after and Davis Cup being in Glasgow, I didn’t attend much for about a year. Then we draw Serbia away. Aside from it being pretty close from Budapest, it was actually almost on ‘home ground’ for me as I studied Serbian at university. I was really happy to be able to write a whole guide of tips and things for people about Belgrade, and I didn’t expect so many people to actually come up and thank for me for how useful it was when we were there!

Fed Cup in Tallinn followed by the infamous playoff in Constanta. This was the first time I stayed in a hotel with other BATS (previously using Air BnB) and I really enjoyed the whole thing. Then this year in Tallinn, and suddenly we draw Japan away. I think this is the thing I probably have BATS to thank for the most. I’d always wanted to go to Asia and this was a perfect excuse, but being able to do it with a handful of other people was just amazing and pushed me over the line to book it. We all booked flights based on a very loose itinerary, worked out Air BnBs/Hotels, and had an unbelievable 10 days in a truly fascinating country. 8,000 miles is a very long way from home when you lose as all of us who went can confirm, but I would not have traded that trip for anything.

So if I think back to when I casually decided to “pop along” to see what it was all about in Budapest, to then travelling all the way to Japan to see a Fed Cup tie, I am incredibly grateful to BATS for basically being an organisation that puts like-minded people in touch with each other.

I would highly recommend anyone to join that’s looking to go to things and would enjoy meeting up with other tennis fans all over the world, or organising trips to events. Sure you get some people who are very in to certain players, or others who prefer this tournament over that, but in general everyone just enjoys watching tennis.

And don’t be put off by tennis fan clubs being generally populated by middle-aged/retired people either!