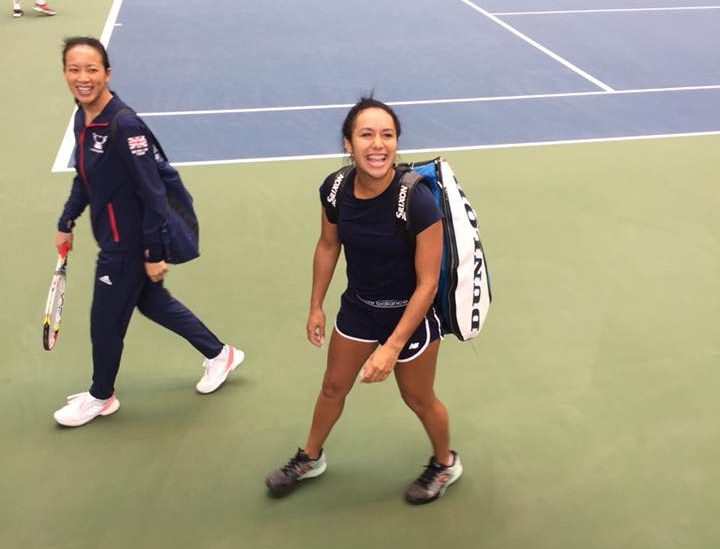 I must confess at the outset that I have a preference for men’s tennis, which of course is somewhat unsisterly of me, but so it is. However, the Fed Cup has rather altered my view over time, given the range of teams on offer, and a quite different experience. The dates of this tournament did not really sit too well for those of us who travelled to Marbella for the Davis Cup – some people travelled back to the UK then back out again for Tallinn. Others, like my group, headed off via Stockholm from Malaga to Tallinn. All in a day’s work you may say. We felt the travel experience was of interest.

For people not too sure how all this works in relation to the women’s team game, please do not refer to this article as a definitive analysis. Both the Fed Cup and the Davis Cup are remarkable in their complexity of zones, probably something to do with large numbers of teams. I once read a book about it all but I remain non the wiser really. What I can discuss is the most recent Tallinn experience where 14 teams were involved – quite an array of tennis spread over 4 days.

The format is round robin and with 14 teams, there were two pools of 3 teams and two pools of 4 teams. The first three days then, were spent on matches within pools as it were and the play off matches were played on the final Saturday. The prize for two of the teams was to advance to the World Group II play-offs later this month in Japan.

Serbia triumphed in their pool comprising Bulgaria and Georgia and GB were in the other pool of three. We distinguished ourselves by winning all our rubbers against Estonia and Portugal. Jo Konta and Heather Watson did well enough, and Katie Boulter and Anna Smith complemented one another as a new doubles pairing.

Hungary won their pool, needing to play 3 matches against Croatia, Slovenia and Sweden while Latvia won their group against Poland, Turkey and Austria. Jelena Ostapenko caused something of a stir as the Lativian more highly ranked star.

Our GB play off was against Hungary and we won without too much energy expended. It felt as if we should be the champions of the whole event, but the strange feature of the Fed Cup is that on this occasion, we won the right to try again for promotion out of the Euro-Africa zone 1 where we have been languishing for some time.

If you want to see the most highly ranked tennis players live, you are best avoiding the Fed Cup. The outcomes are most certainly dependent upon the extent to which the “celebrities” are prepared to turn out.   Poland may have fared differently for example, had Radwanska participated. On the other hand, the Davis Cup is likely to suffer from the same thing and, at least at the Fed Cup, there are lots of opportunities to talk to tennis players and collect autographs if that is what you like. Seating is often very close to the action and the atmosphere is much more intimate. The main court had tiered seating and, of course when Estonia were playing, the home crowd was in and noisy. Otherwise, the event is a relatively quiet affair.

When GB was not playing, there was the opportunity to negotiate the snowy landscape and sight see, or venture to the Old Town or take a ride in the warm shelter of the tour bus. Thankfully not open top. We did all of those things (some of us had done the Fed Cup before in Tallinn so fond reminders were available). We also chose to attach ourselves to the Turkish team for a session, becoming very involved in the fabulous efforts of Cagla (Chaala) to overcome opponents more highly ranked than herself, of Latvian origin. So supportive were we in all the excitement that the whole Turkish team presented us with a pennant, signed by each of them. We even wondered about appearing on the Turkish Tennis Federation website!!

And so our work was done – GB overcame and moved on through. L’Ermitage Hotel in Tallinn is every bit as good as the Von Stackelbertg, although the mulled wine is not quite as some of us remember it. Nothing stays the same, this we know.

So, while Japan may be a step too far for some of us, may I recommend the Fed Cup as a feast of women’s tennis well worthwhile the effort. A return to Budapest would be most welcome for some of us.