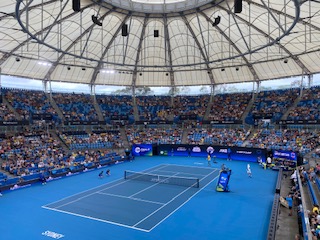 Our cunning plan, not for the first time, was hatched after several glasses of the red stuff with our great friend, Jane, when she was visiting Anita and myself over in Javea. Like ourselves, Jane will have done her own mini Grand Slam, when we arrive in Melbourne next Monday. Currently, we are holed up in Adelaide, having had another great day’s tennis at the international tournament here, where we were fortunate enough to see the likes of Danny Evans, and the home favourite, Ash Barty, and a young Canadian, who I tip to go very far in this great game of ours, Felix Auger Aliassime.

We aimed to spend a week in Sydney, followed by 4 days in Adelaide, and then on to Melbourne for the Open. We experienced one of those magical serendipity moments, as, when we were planning our itinerary, Anita suggested that we spend one day only at the ATP Cup. By complete chance, the day we booked tickets for months ago, happened to feature our GB boys take on the mighty Aussies right in their own backyard in the quarter finals. We were so excited, as we caught a taxi to the complex from our apartment in Darling Harbour. The stadium was a 45 minute journey to the Olympic Park, on the outskirts of the city. A few days later, we were out there again to see Sir Elton John in concert in the Qudos Stadium, where he performed like the consummate professional we all know him to be.

The first match on court was to provide a very tough challenge for Cameron Norrie, in the form of his Aussie counterpart, the irascible, mercurial, and richly talented Nick Kyrgios. Somewhat predictably, the task proved beyond the plucky Brit, and the occasionally, controversial Aussie won comfortably in two sets, meaning that Britain’s numero uno, the highly competitive Danny Evans, would have to beat Alex de Minaur, if we were to stand any chance of progressing to the semi-final. Danny proceeded to produce a typically combative and doughty performance to beat his opponent in a highly entertaining 3 set match, which he clinched in a tense third set tie break, finishing in a flourish, with panache and some style!

So, as we have often experienced over the past few years in traveling around, cheering on the lads in the Davis Cup, in places like Glasgow, Serbia, Rouen, Ottawa, and Naples, everything would be decided by the result in the doubles. Not surprisingly, Leyton Hewitt decided to stick with the Kyrgios/ Minaur combination, while Tim Henman plumped for the dependable Jamie Murray and Joe Salisbury, who we were seeing for the first time. There then followed a fantastic doubles encounter, played with so much passion, endeavour, intensity, enthusiasm, with no mean skill, amidst a fantastic atmosphere, with the Aussies roared on by a partisan home crowd. The British pair, however, stuck doggedly to their task, winning the first set reasonably comfortably. Predictably, the Aussie duo came storming back, winning the second set, with some aggressive and very entertaining tennis.

The Championship tie-break to decide the tie was one of the most closely-contested, exciting, and totally compelling, we have ever witnessed in many years of watching tennis. The impetus kept switching from side to side, with no pair ever getting more than two points ahead of their opponents, and before we knew it, GB had held no fewer that 4 match points to gain a place in the semis. Both Jamie and Joe stuck doggedly to their task superbly, despite not converting three match points. Crucially, and agonisingly, the ball sat up nicely for Jamie to put away a simple volley, which is, arguably, the strongest part of his game. In the event, he inexplicably hit the ball beyond the baseline. This remarkable escape seem to fire up the Aussies, and they produced some of their best tennis over the remaining points to squeeze through by the tightest of margins -18-16 -so close, yet so far for the Brits.

The match was played in a great spirit, and, although the home support was extremely vocal, which was to be expected, they often appreciated and applauded the great winning shots flying off the racquets of the two British lads, and they all received a standing ovation at the end of an epic, gladiatorial contest, with everything being left out there on the court by the marvelous participants. We were thrilled to have been present at such a fantastic contest and also to witness the first year of this new completion in one of our favourite sporting countries. It also happened to be the inaugural year of the Adelaide International Tennis Tournament, so we felt doubly blessed! We were very fortunate to avoid all the horrendous bush fires which have ravaged the country, but our hearts go out to everyone affected.